Moundridge, Kan., May, 2021 — MicroMetl is the nation’s largest independent manufacturer of accessories for commercial heating and cooling equipment. Recent changes in its product mix put MicroMetl in a position where major advancements had to be considered for its production process if the company wanted to remain competitive.

“We’re always looking at ways to do a better job for our customers,” says Brandon Schultz, CIO of MicroMetl, headquartered in Indianapolis. “To be competitive we must produce high-quality products in a cost-effective manner, so we have to continually look for ways to drive down the cost of production. We have been doing this for 56 years, and we need the best tools to stay competitive. So, with the change in our product mix, we went to our engineers and asked them, how can we be faster and cheaper?”

Ultimately, the change in product mix required MicroMetl to be more flexible when it comes to production. MicroMetl turned to The Bradbury Group for help. 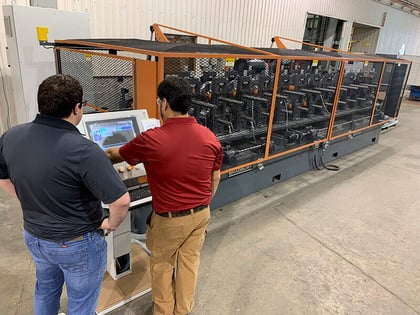 “We wanted to increase our manufacturing flexibility and capacity to meet our customer demands in a more efficient manner,” says Scott Nelson, MicroMetl’s Senior Manufacturing Engineer. “Our existing roll former was aged and would not adjust for the flexibility we needed.”

MicroMetl originally reached out to Bradbury in 2017 and again in 2018, trying to make an educated decision on what was needed to make the MicroMetl operation more efficient.

“Fast forward to March 2020, we were approved to purchase a new roll former, but on a tight timeline,” Nelson says. “Bradbury had a rep at our facility in Indianapolis almost immediately and right at the beginning of the pandemic. Within three weeks, we had the quote from Bradbury on the custom design and a purchase order was sent confirming the sale. I feel all our requests and requirements were met in a timely fashion to help bring this project to fruition, especially challenging during a year of uncertain times.”

“Zack and Scott were in constant communication with me during the design phase, which was crucial to getting the project off on the right foot, Nelson says. “They were readily available for any questions throughout the process and communicated with us in a timely fashion.”

Nelson worked directly with Bradbury engineers to investigate the possibility of a roll former that could do everything MicroMetl needed. “We visited Bradbury (in Moundridge, Kan.) and they basically took us through a Roll Forming 101 class,” Nelson says. “We spent four days at Bradbury, learning about our machine and roll forming in general. We tested our parts and worked through any programming issues. When it was time to sign off, we had our closing meeting with all the individuals who helped make the project a success during the design and going forward during installation and maintenance.

“Our old roll former could produce a one-size part. Any changes to that part had to be made on the press brake, by a highly skilled and highly paid operator. With our new roll former, with the push of a button, we can go from producing our smallest part to our largest part in less than two minutes. The roll former is the solution to performing 90 percent of the work we need without using the press brake or outsourcing any work.”

MicroMetl can now manufacture panels with varying size webs, legs and lips. The old roll former manufactured one size web, leg and lip. “We can reduce our changeover time dramatically with the automated system that quickly changes from one curb size to another in a matter of minutes,” Nelson says. “We can feed multiple gauge thicknesses through the roll former without adjusting by using the BardieTM Cartridge Technology. That’s extremely helpful in our deck pan manufacturing where different gauges may be in the same stack of blanks.”

“The overall experience was a lot easier than I thought it would because of the expertise at Bradbury” Nelson says.

About The Bradbury Company

The companies of the Bradbury Group are known for the cutting-edge technology and reliability built into every product – and for the exceptional service that helps us satisfy customers worldwide. We strive to set the standard for automated production and systems integration in the metal processing industry. We believe our leveling, cutoff, punch, folding and roll forming machines and automated systems set the highest standard for productivity, reliability and safety in coil processing. To learn more, visit https://bradburygroup.com.